Saint Jean Pied de Port is the traditional starting point of the Camino Francés, which is the most popular way of all the routes of the Camino de Santiago.  The town itself is quite old, traditional, and normally fairly busy.

Saint-Jean-Pied-de-Port (literally meaning "Saint John at the foot of the mountain pass" in French) is a commune in the Pyrénées-Atlantiques department in south-western France in the Pyrenean foothills. The town is also the old capital of the traditional Basque province of Lower Navarre.

View Saint-Jean-Pied-de-Port in a larger map

The cobbled rue de la Citadelle runs down hill and over the river from the fifteenth century Porte St-Jacques to the Porte d'Espagne by the bridge. The pilgrims from France and whole Europe come across the Porte St-Jacques and follow the route to Santiago de Compostela, it's first gate is the Porte de France.

The 14th century red schist Gothic church, Notre-Dame-du-Bout-du-Pont, stands by the Porte d'Espagne. The original was built by Sancho the Strong of Navarre to commemorate the 1212 Battle of Las Navas de Tolosa where Moorish dominance of Spain was undermined.

Above the town at the top of the hill is the citadel, remodelled by Vauban in the 17th century.

The first stage for every pilgrim of the way of St.James is the Pilgrim's Office, on the street Amies du Chemin de Saint Jacques at 39 rue de la Citadelle, where they get the pilgrim's passport (credential), in which during the pilgrimage every day collects the stamps, to get after 790 kms in Santiago de Compostela the Certificate of the way (Compostela). 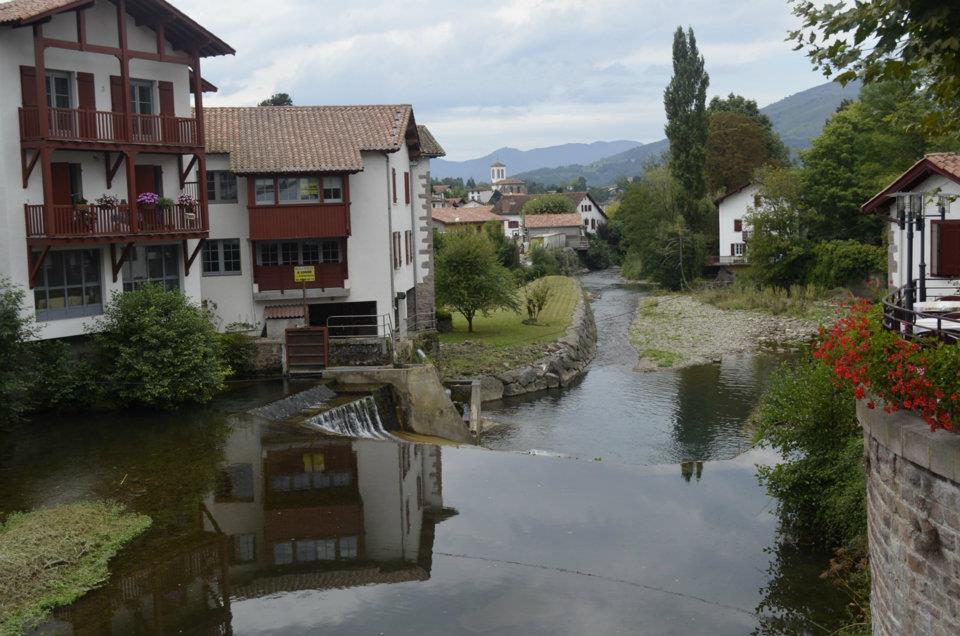 From its very foundation at the end of the 12th century on the orders of the King of Navarre, the town was the key urban centre of the Kingdom of Navarre in its territories in the northern Pyrenees. A strategic location at the foot of the Cize mountain pass (col de Cize), astride the major Pyrenean crossing point at Roncevaux (Roncesvalles), invested Saint-Jean-Pied-de-Port with an increasingly important role as a military stronghold, garrison town, trade centre and key destination on the pilgrimage trail to Santiago de Compostela.

1. Maison Mansart:  this house was built at the start of the 18th century by a wealthy wool dealer from the Béarn, David de Fourré. Its fine pink sandstone façade is particularly striking in terms of its aesthetic unity and symmetrical design. It gets its name from its mansard slate roof. The town council bought this large townhouse in 1935 with a view to it housing the town hall, as has indeed been the case since the 1950s.

2. The Navarre or market gate:  This gateway set in the medieval walls has retained its original form – a fine ogival arch and passageway. This gate opens out onto the small square in front of the church, site of the medieval market-place. In times gone by, gigs (small carts), carts and carriages bringing provisions to the market stalls had to squeeze through this passageway.

3. The Notre Dame gate:  this gate faces the old bridge across the Nive and the rue d'Espagne district. The statues of John the Baptist and the Virgin and Child housed in the upper level of the gate tower are symbols of their benevolent, protective watch over the town. 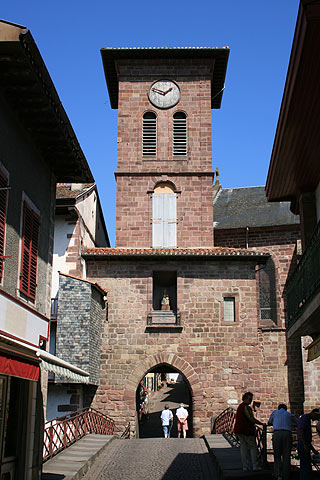 4. The church of Notre-Dame-du-Bout-du-Pont:  This church is the most important gothic structure in the French Basque Country (after Bayonne Cathedral). Its construction has traditionally been attributed to the King of Navarre, Sancho the Strong, to commemorate victory over the Moors in the battle of Las Navas de Tolosa in 1212. The first rows of stones, bearing carved mason’s marks, may date from the original church building (beginning of the 13th century). The majestuous pink sandstone façade features a gothic portal with carved columns and capitals. Inside, a wide nave, two aisles and two floors of galleries added in the 19th century, make for a soaring ensemble of pillars and columns. To either side of the polygonal choir, two Reuleaux triangle-shaped stained glass windows feature the coats of arms of the town and of the Kingdom of Navarre. A recently-restored Cavaillé Coll organ provides musical accompaniment to church services.

5.  Maison Larrabure:  Number 7, rue de la Citadelle is home to the former rectory of Saint-Jean-Pied-de-Port which now boasts a new exhibition space on its ground floor. Here you’ll be able to view a wide range of exhibitions displaying everything from objects of cultural interest to Art in all shapes and sizes!

6. The gate of France:  this gate owes its name to its position facing the border with France.

7. Rue de la citadelle:  Bears a certain resemblance to a ‘bastide’ (fortified town), with houses clustered around this sloping street. The local stone, pink Arradoy sandstone, is widely used in façades and is sometimes combined with stone of other colours. Jettied (projecting) floors, half-timber construction and eaves with their carved beams are some of the architectural hallmarks of this street’s houses. Lintels are carved with thought-provoking inscriptions and decorated with geometrical designs or religious symbols. 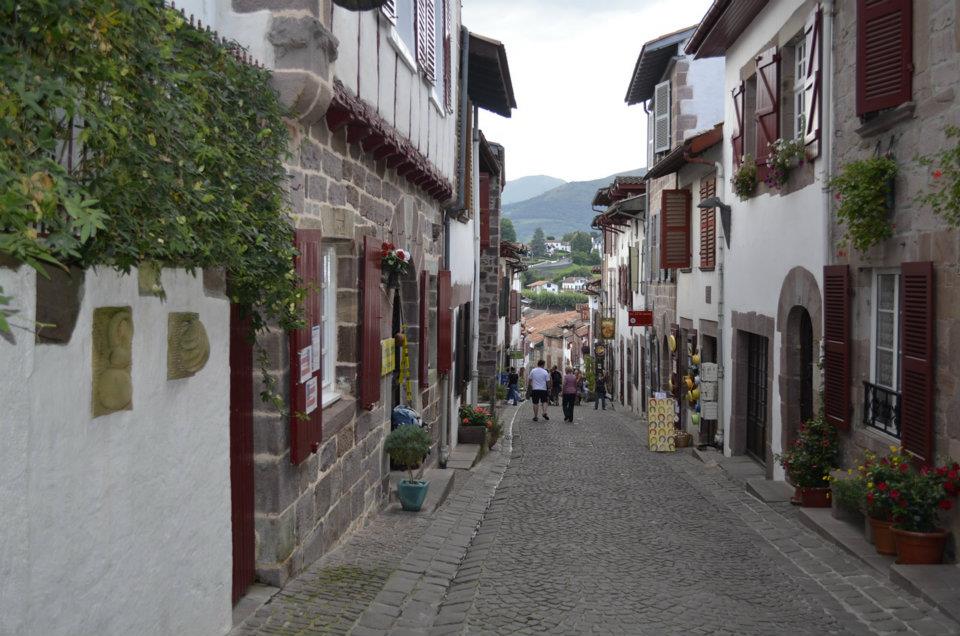 8. Maison Arcanzola:  This house bears the oldest inscription of all (AÑO 1510). It is especially noteworthy for its upper storey composed of a timber frame filled in with bricks laid in a herringbone pattern. In 1531, Jean de Mayorga "the Blessed" was born here. This Jesuit priest was  martyred off the Canary Islands by a Huguenot privateer. One of the beams supporting the roof overhang is marked with a small white cross in commemoration of the martyr.

9.  The "Bishops’ prison":  Separated from the Maison Laborde (the pilgrims’ information centre for pilgrims to Santiago) by a garden, the ‘Bishops’ prison’ is one of the most famous buildings in the town, boasting a fascinating past. Its current, more recent name brings together two quite different historical elements:  the town’s status as the Episcopal see for the Bishop of the diocese of Bayonne during the Western Schism (late 14th to early 15th century) and its role as a prison, noted as early as the end of the 18th century. The building as it currently stands is rather unusual: the entrance way, paved with pebbles, opens out onto the guardhouse, then the punishment cells, which are relatively spacious and well-lit. A narrow staircase offers access to a huge, underground, rib-vaulted room from the medieval period which may well have been used as a warehouse. Today, in an unexpected twist, it has become a mysterious prison from which to escape…to the middle ages, with the pilgrims following the road to Santiago.

10. The gate of Saint James:  Added to the list of UNESCO World Heritage sites in 1998, this gate is the traditional entry point for pilgrims on their way to Santiago de Compostela. They came from the district of la Madeleine in Saint-Jean-le-Vieux and passed through Saint-Jean-Pied-de-Port in the direction of Roncesvalles.

From the gate there are good views of the hill known as Arradoy, which was once a stone quarry, and which is now covered with vineyards belonging to the Irouléguy ‘appellation’.  We have time to take a quick look at a first-class sports facility, the Jaï Alaï, a large building in the lower part of the town, where Cesta Punta (Basque Pelota) is played. In front of this can be found a bas-relief of Juan de Huarte, a physician-philosopher who was a forerunner in the field of career counselling and author of a famous work used by Montesquieu in his treatise, ‘L’Esprit des Lois’.

11.  Wall-walk:  Thanks to recent work, it is now possible to walk along the medieval walls from the porte de Navarre to the porte Saint-Jacques and therefore follow in the footsteps of the soldiers of the garrison, who were entrusted with protecting the stronghold of Saint-Jean-Pied-de-Port. Murder holes, guerites, bartizans and machicolations beckon us to plunge into the past and discover the town’s military heritage and architecture. It’s also a lovely walk for young and old alike in the upper town!

12. Cobblestone path:  In times gone by, people on foot and horseback would have used this path by the porte Saint-Jacques to go to the Citadel. You can see that the cobblestones have been  deliberately angled in order to offer a better footing to horses taking this steep, winding path.

13. The Citadelle:  Towering more than 70 metres above the town, the Citadelle is built upon the hill of Mendiguren. Constructed around 1625-1627 and strengthened during the 1640s, it is an excellent example of a star-style fort designed by pre-Vauban military engineers. After visiting the fort in 1685, Vauban placed his own stamp on the place, as can be seen in the care and attention to detail lavished on the building’s general structure, gates and underground passages.

14. The "demi-lune royale" viewpoint:  A viewpoint indicator will help you enjoy the splendid vista over the valley and corrie. Beneath the drawbridge leading to the Pavillon des Gouverneurs (the Governor’s residence), which is topped by a small steeple, is a walkway with 269 steps. It finishes beside the Porte de l'Echauguette by the apse of the church on the banks of the Nive. For the less active walker, it may be better to reach the church by going back on their tracks and taking the...

15. Schoolchildren’s path:  sited on the left between the two bastions, this series of steps descends through a wood to meet up with the chemin de Saint-Jacques which in turn is linked to the route de Çaro by another series of steps.

16. The Eyheraberry bridge and the allée d'Eyheraberry:  Once through the the porte de l'échauguette gate, a lovely walk along the banks of the Nive, far from the hustle and bustle of the town, takes you to the esplanade d'Eyheraberry (which means new water-mill in Basque), a beautiful, open-air space where, during the time of the French Revolution, national celebrations and patriotic events were held. Above limpid waters where trout disport themselves is a stone humpback bridge, wrongly thought to date from Roman times.

17.  The Spanish Gate:  Set into the town wall built during the 1840s, this gateway looks onto the wide medieval road that crosses the Pyrenees. This ‘Route Napoléon’ was renamed the ‘route du Maréchal Harispe’. Nowadays, pilgrims wanting to make the 7 hour  Pyrenean crossing to Roncesvalles on foot on their way to Santiago de Compostela are to be found striding along this road.

18. Rue d'Espagne:  This district lay outside the town’s walls during the Middle Ages. Its economic role was to provide a home to the town’s craftspeople, as can be seen by the inscriptions on the house lintels bearing the name of the home-owner’s trade or profession. At number 9, an inscription can be seen that records the very high price of wheat in 1789, this being a period when the cost of wheat was a major issue.