Founded by the Romans and located on the  Pilgrim's Way to Santiago,  Pamplona  is now a modern and welcoming city with a wide range of activities that include walking around century-old walls and cobbled streets; resting in parks and terraces; trying its delicious tapas (or pinchos as they're known locally); visiting historical monuments.From  Pamplona’s  beautiful Magdalena Bridge  over the river Arga, the route crosses two consecutive roads and goes up a pedestrianised walled path to the Portal de Francia, a historical access gate to the fortified city.The five-kilometre walls around the city create an unusual and evocative stroll around its history. The city walls of  Pamplona  areone of the most interesting and best preserved military structures in Spain  and hold the status of National Monument. As a medieval city, Pamplona surrounded itself with walls to defend itself against invaders, although it was not until the incorporation of the Kingdom of Navarre into the Crown of Castile in 1515 that its strategic location turned it into an advanced post of the Spanish crown against France.  The development of the great and formidable fortress began at that time and has its high point in the  Citadel. Bastions gates, half-moons, ravelins, forts... all give the  walled enclosure the sobriety and sophistication  of this kind of defensive system.The Taconera Gardens are the oldest and most beautiful and emblematic park in Pamplona. Its 90,000 square meters are located near the old city walls very close to the Old Quarter of the city, and the park has a marked romantic and Versaillesque character. It combines trees and flowers with a wide range of sculptures to offer the visitor a series of different itineraries. If anything characterises this delightful place it is the mini-zoo in the moat of the walls that contains deer, ducks, pheasants, swans, peacocks... in a state of semi-freedom. 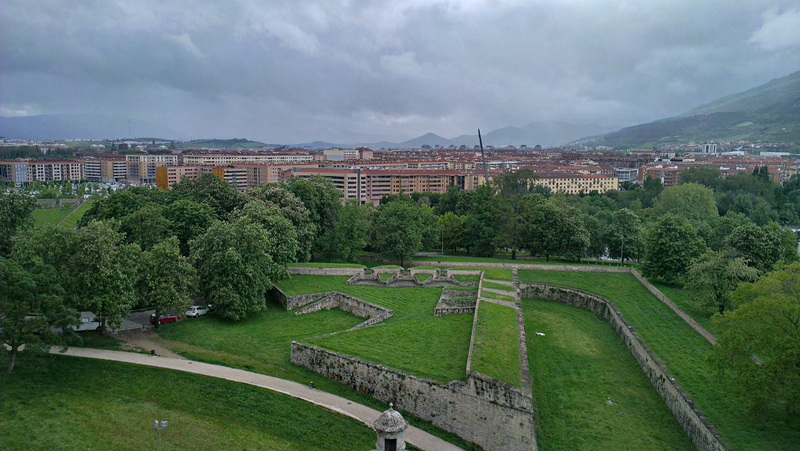 The Plaza del Castillo is the nerve centre of the city. It is a slightly irregular quadrilateral covering 14,000 square metres and has been and still is the stage for the main events conforming the idea of Pamplona: bullfights until 1844, battles, tournaments, markets, military parades, political and popular demonstrations, etc.

Many of the narrow lanes of Pamplona’s Historical Quarter stem off from this square. It is enveloped by houses mainly dating from the XVIII century with balconies, towers, penthouses and picture windows. 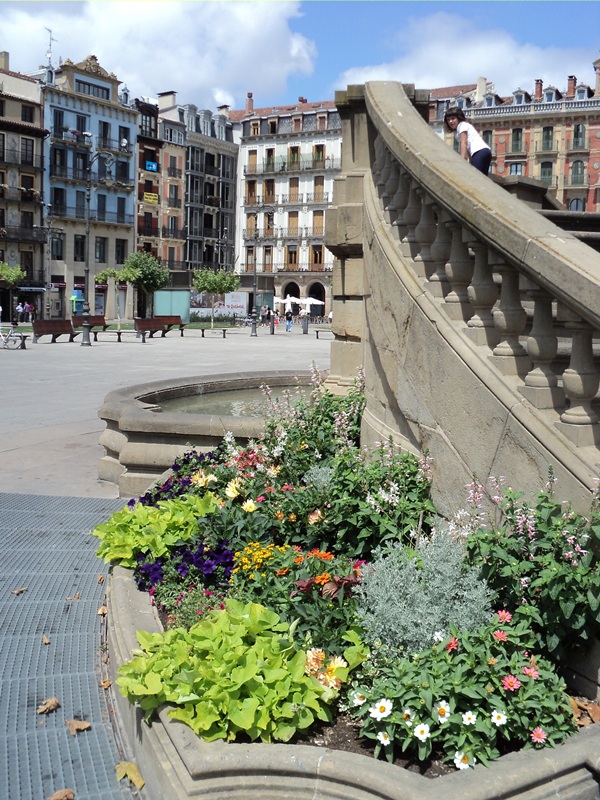 Plaza de Toros de Pamplona is a bullring in Pamplona, Spain. It is currently used for bull fighting. The stadium holds 19,529 people. It was built in 1922. It is the ending point of the famous Running of the bulls during the festival of San Fermín. 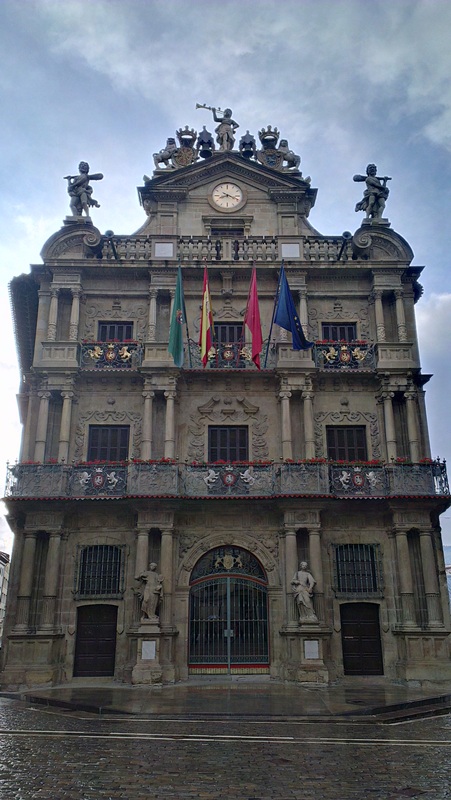 The City Hall is in the heart of the Old Quarter of the city, and its site is not a coincidence. In 1423 King Carlos III ("el Noble") of Navarre enacted a law called "El Privilegio de la Unión" (Privilege of the Union) to put an end to centuries of bickering and confrontations between the three boroughs and located the building on the spot where the three boroughs that existed at the time (Navarrería, San Saturnino and San Nicolás) came together.

Every July 6th at 12 noon millions of people all over the world are watching the façade of the City Hall of Pamplona on TV. The media are there to record the spectacular "chupinazo", the moment when a ceremonial rocket is launched from the building to start the fiesta of San Fermín.

Situated on the edge of the Casco Viejo (Old Quarter) of Pamplona, in the same site that the old Roman city of  Pompaeloonce stood, is  Pamplona Cathedral, a fine example of the Gothic period (14th and 15th centuries). This symbolic monument houses the largest number of historic and artistic relics in the city. Kings were crowned and Parliaments convened in the cathedral; indeed, it was the seat of the royal court for three centuries. 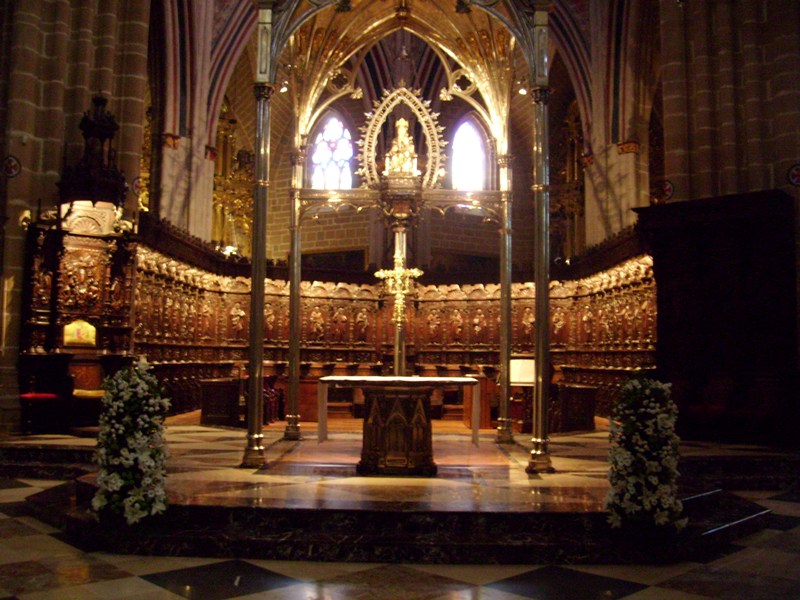 The sobriety of its neoclassical façade, a work by Ventura Rodríguez, contrasts with the  Gothic  interior, where the 28-metre-high central nave is home to the fine  tomb of Carlos III of Navarre and his wife, Eleanor of Castile. However, the real jewel of this cathedral is its  cloister, considered among the most beautiful in the Gothic world, a must-see on every visitor's itinerary.

Since the foundation of  Pamplona  in Roman times, the site of the cathedral has always been chosen as the location for the main Christian church in the city. It was on this very spot thatCarlos III 'el Noble'  ordered the construction of the present building in the purest Gothic style, inspired by other wonderful Gothic  cathedrals such as that of Bayonne, in France. Its location, on the route taken by pilgrims on their way to Santiago, dictated that its apse would be polygonal in shape, with an ambulatory, characteristic of churches on the Pilgrim's Way.

Pamplona Cathedral was restored between 1992 and 1994. The restoration work uncovered part of the rich polychrome that originally covered its walls, pillars and ceilings, and which concealed a 1773 repainting that simulated the colour of stone and increased the luminosity of the church, with silver-covered lamps forged in the workshops of Granada. The restoration work confirmed the existence of previous churches from the 6th and 10th centuries, as well as bringing to light aRomanesque crypt  under the apse on the left side of the building.

From July 6th to 14th every year the word fiesta is written in capital letters in Pamplona. The San Fermín have arrived. When the chupinazo (ceremonial rocket) is fired the city explodes into life. Thousands of people from all over the world descend on the city, which dresses up in red and white. For nine days the streets turn into a feast of friendship, joy, music and non-stop partying, to the rhythm of the charangas and the peñas.

The Encierro (Bull Run) is the only moment of the day when the party stops, and great tension descends on the route just a few minutes before the bulls start their 'race' behind the mozos (young men). The surge of emotions culminates in the bullring at the end of the run. The fiesta continues with caldico (clear broth) chocolate with churros (long doughnuts), the Gigantes (ceremonial giants) and Cabezudos (carnival figures with big heads), the aperitif, the bullfight in the evening, or the fireworks at night. These then give way to all-night partying.