The Lady of Burgos (Virgin Mary) was begun in the 13th century at the same time as the great cathedrals of the Ile-de-France and was completed in the 15th and 16th centuries. The entire history of Gothic art is summed up in its superb architecture and its unique collection of works of art, including paintings, choir stalls, reredos, tombs and stained-glass windows.

Burgos Cathedral, an outstanding example of an integral Gothic cathedral, with church, cloister and annexes. has exerted, at different times, a considerable influence on the evolution of architecture and the plastic arts. It bears witness to the creative genius of many architects, sculptors, and craftsmen. It is sufficient to call to mind its role in the diffusion in Spain of the forms of French Gothic art of the 13th century, and the international importance of the workshop in the 15th and 16th centuries where artists from the Rhineland, Burgundy and Flanders trained Spanish architects and sculptors, thus creating one of the most flourishing schools of the end of the Middle Ages. 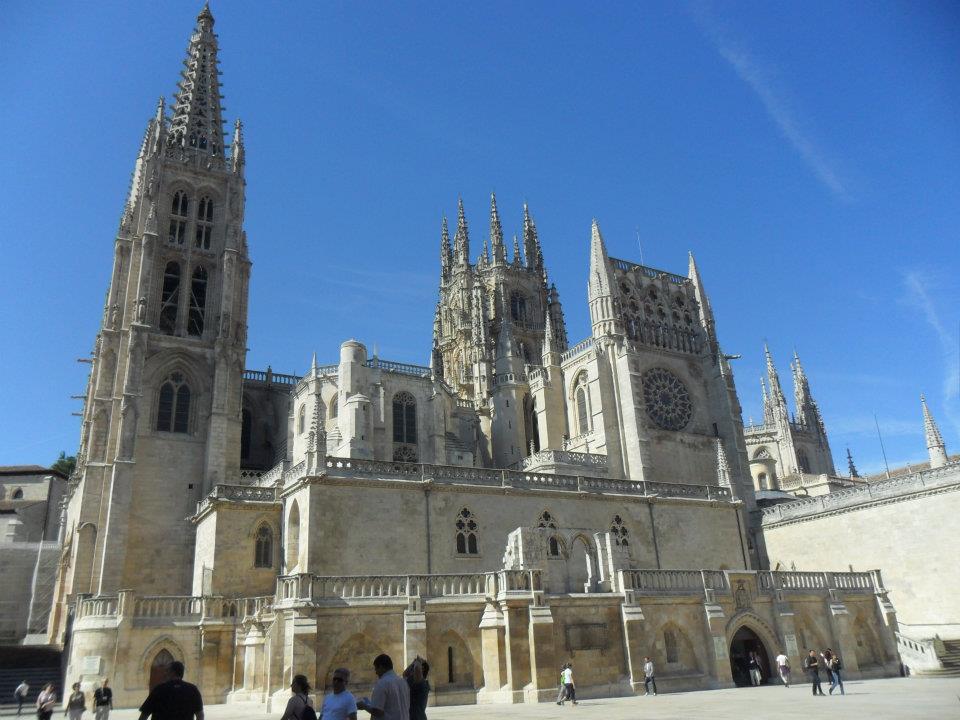 Begun in 1221 and completed in 1567, Santa María de Burgos is a striking summary of the evolution of Gothic architecture. The body of the work, undertaken through the initiative of Bishop Mauricio in the reign of Ferdinand III 'the Holy', was rapidly carried out: a first campaign, the most important, was completed in 1293. The plan of the cathedral is based on a Latin cross of pleasing proportions. The three-storey elevation, the vaulting, and the tracery of the windows are closely related to contemporary models of the north of France. The portals of the transept (the Puerta del Sarmental to the south and the Puerta de la Coronería to the north) may also be compared with the great sculpted ensembles of the French royal domain, while the enamelled brass tomb of Bishop Mauricio resembles the so-called Limoges goldsmith work. Undertaken after the cathedral, the two-storeyed cloister that was completed towards 1280 still fits within the framework of 'French' High Gothic.

After a hiatus of some 200 years, work was resumed on the Cathedral of Burgos in the mid-15th century and continued over more than 100 years. These were embellishments of a profuse splendour which have, ever since, assured the world renown of this edifice. The workshop was composed of an international team. Among the most famous architects were Juan de Colonia, soon relieved by his son Simon (towers and open spires of the facade, the Constable's chapel, the Chapel of Santa Ana) and Felipe de Borgoña, assisted by numerous collaborators (choir, cupola and lantern tower over the transept crossing).

When in 1567 two of these architects, Juan de Vallejo and Juan de Castaneda, completed the prodigious cupola with its starred vaulting, the cathedral of Burgos incorporated one of the greatest concentrations of masterpieces of this last phase of the Gothic: the Puerta della Pellejería (1516) of Francesco de Colonia, the ornamental grill and choir stalls, the grill of the chapel of the Presentation (1519), the retablo of Gil de Siloé in the Constable's chapel, the retablo of Gil de Siloé and Diego de La Cruz in the chapen of Santa Ana, the staircase of Diego de Siloé in the north transept arm, the tombs of Bishop Alonso de Cartagena, of Bishop Acuña, of Abbot Juan Ortega de Velasco, of the Condestable Pedro Hernández de Velasco and of his wife Doña Mencia de Mendoza, etc. Thereafter, the cathedral continued to be a monument favoured by the arts - the Renaissance retablo of the Capilla Mayor by Rodrigo and Martín de la Haya, Domingo de Berríz and Juan de Anchieta, the tomb of Enrique de Peralta y Cardenas in the chapel of San Enrique, the chapel of Santa Tecla and the trascoro of the 18th century.

The cathedral was declared a World Heritage Site by UNESCO on October 31, 1984.