Considered one of the landmarks of historic interest in the Camino de Santiago, we find the beautiful village of Castrojeriz. Its rich history may take up consideration as castro Visigoth, or perhaps, also, Roman fort, (they say was founded by Julius Caesar) in whose castle was developed important battles between Christians and Moors.

In the year 882 a Foramontanos captain, Nuno Nunez, repopulated the old village destroyed by the Arabs. In the 974 was the first of the Castilian privileges by Count Garcia Fernandez and Alfonso VII in 1131 could annexation to the crown of Castilla.

Its old town, situated in the middle-lower slope, constitutes one of the longest urban routes by which the Camino de Santiago runs nearly a mile long. At a time when he placed monumental churches, three convents, hospitals (had up to seven), guest houses, inns and major shopping outlets in which abundant viands brought from overseas.

This is how one of the most splendid moments of its history, emerged with the rise of the Camino de Santiago. In medieval times Castrojeriz becomes a people-road with a long run at the foot of the castle from which you can see more of the neighboring towns such as Hontanas, Villasilos, Villaveta, Villasandino, Castrillo de Murcia, Castrillo Matajudíos, Hinestrosa or Pedrosa del Príncipe.

Today has a census of 1,105 people, although as in most of our Castilian villages, their population increases significantly in summer and decreases, alas, ostensibly with the rigors of winter.

Its old town has emblazoned houses like the Casa del Cordón or the Palace of the Gutiérrez-Varona, an example of a Renaissance palace. It also has some houses that recall the traditional architecture of the place, among which the former synagogue (now Inn on Winery) and many houses of stone and mud or adobe as the Ethnographic Museum, with an interesting winery, farm implements and machines.

In the so-called "neighborhood" of the Collegiate Church of Santa Maria del Manzano, this impressive temple is built between the ninth and thirteenth centuries, within which is stored Castrojeriz patron, the Virgen del Manzano, beautiful polychrome Gothic carving in stone which was sung by Alfonso X the Wise in one of the miracles of the Cantigas. It also has two separate altars of baroque-rococo style with a Santiago pilgrim and some paintings by Mengs. 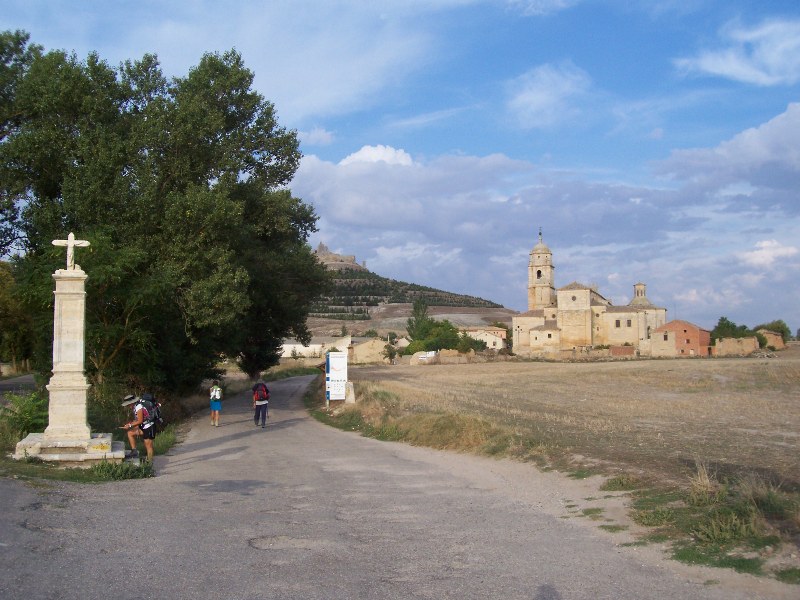 Plaza Mayor, which appears in an arcaded sides, noting, in one of its ends, the council with a curious clock tower. In the ancient church of San Esteban is just some remains of which recently built a new shelter for pilgrims.

Towards the end of the village and along the longitudinal path of the main street, we find the church-fortress of San Juan Bautista, gothic design, built between the thirteenth and sixteenth centuries, which has a splendid Gothic cloister with a beautiful Mudejar.

Among other monuments that Castrojeriz account, we will also highlight the Santa Clara Monastery, founded by Alfonso X the Wise, which has a fourteenth-century Gothic church and some baroque tables. Today it is inhabited by the Poor Clares, whose tasks, besides the mystical, highlights the interesting task of life just a little taste with delicious pastries and cakes.