The most luminous and colourful cathedral in the region. It is a perfect example of French Gothic architecture, with pure ascending lines and an exquisite series of stained glass windows letting cascades of light into the building. It houses a unique collection: 737 stained glass windows with a total surface of 1,765 m2 made between the 13th and the 20th centuries. The Pulchra Leonina, a Latin appellation that defines the cathedral as beautiful, it was started in the 12th century an intended to be the largest cathedral of the time. This did not happen, but instead it became one of the most beautiful Spanish Gothic churches.

It was built on the site of a previous Roman hot baths of the 2nd century that, 800 years later, the emblematic king Ordoño II converted into a palace. Its doors, its impressive rose window, the choir (one of the oldest in the country) and the delicacy of some figures, like the venerated Virgen Blanca presiding over the constant traffic of visitors, are some of the not-to-be-missed features of this cathedral.

The León cathedral, dedicated to Santa María de la Regla, was declared of Cultural Interest in 1844. It is known as the "Pulchra Leonina" and it is a masterpiece of the Gothic style dominating the mid 13th century, by master architect Enrique. In the late 16th century it was virtually finished. It was erected on the site of Roman hot baths dating from the 2nd century, which were converted into a royal castle by king Ordoño II in the 10th century.

One of the most attractive features is the main front and the three towers (two belfries and one clock tower). The interior represents a beautiful combination of architecture, painting, sculpture and other arts. It must not be forgotten that the Renaissance retrochoir contains alabaster sculptures and that the choir was built by three great artists: Jusquin, Copin of Holland and Juan de Malinas. Particularly noteworthy is the Plateresque screen in the wall behind the sepulchre of king Ordoño.

It has three portals decorated with sculptures situated in the pointed arches between the two towers. The central section has a large rose window. Particularly outstanding is the image of the Virgen Blanca and the "Locus Apellatiore", where justice was imparted. 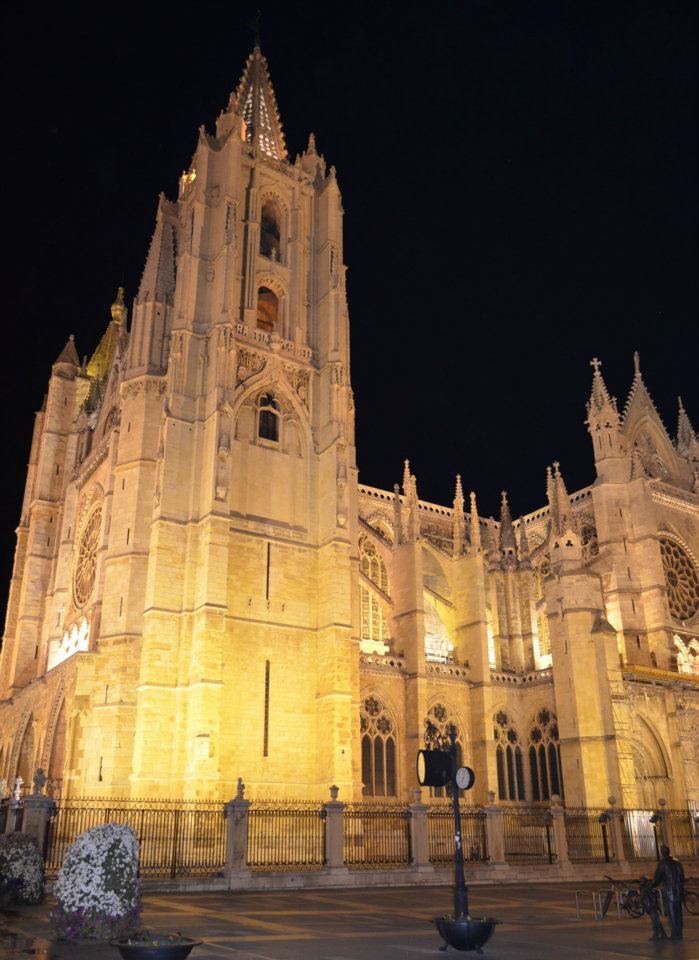 In the Main Chapel there is an altarpiece by Nicolás Francés (15th century) and a silver urn containing the relics of San Froilán, the town's patron saint, made by Enrique de Arfe. The 13th-15th century cloister contains singular sculpted details in the capitals, friezes and ledges.

The Cathedral Museum houses a large collection of sacred art. There are almost 1,500 pieces including 50 Romanesque sculptures of the Virgin, dating from pre-historic times to the 18th century (Neoclassicism) with works by Juan de Juni, Gregorio Fernández, Mateo Cerezo, a triptych of the School of Antwerp, a Mozarabic bible and numerous codices.