This is one of the most representative buildings of the maragata capital, a noble, loyal and bimillennial town in the province of León, a crossroads and melting pot of cultures. It is part of the dioceses of Astorga, one of the oldest in the Iberian Peninsula. The church incorporates and synthesises all the artistic currents, from late Gothic to Renaissance, Baroque, Neoclassicism and all the languages that over the years have reflected the history, art, tradition and faith of all the centuries.

Construction started in 1741, on the site of previous Romanesque cathedrals of the 11th - 13th centuries. Its two twin towers, the belfry and an older tower that has been restored are the building's most characteristic features from outside, together with the characteristic red hue of the stone. Not to forget the statute of the maragato Pedro Mato, which looms over the town from the top of the building. Inside, the visitor is surprised by the numerous works of art in styles ranging from Bytantine-Romanesque to Hispanic-Flemish and Renaissance.

A second Romanesque structure was erected, which was reformed in the 12th and 13th centuries, was erected upon the original cathedral of the 11th century. The present structure is late Gothic and was declared of Cultural Interest in 1931. It has a rectangular ground plan, with three naves, the central one prolonging itself upon the original Romanesque plan, thus preserving the original concept. The original Gothic style leads to the Baroque style of the main gate, incorporating some Renaissance elements, since the building was not completed until 1704.

Gaspar López built the Neoclassical cloister in 1772. The head of the building consists of thee polygonal chapels (the central chapel has seven sides, the others, flanking it, have five). In the presbytery stands the main altarpiece of 1560, made by Gaspar Becerra and recently restored. It is a five-section altarpiece showing scenes of the life of the Virgin (the Assumption in the centre, with the Life and Passion of Christ).

Perpendicular to the nave, there are two Renaissance side chapels. The structure consists of pillars without capitals. In the main nave stands the Flemish choir, with wooden seats and literary ornaments.

The Renaissance southern door has two attached columns framed by a round arch over the main access to the church: above the arch is the image of the Assumption. We must not forget that the western front has two twin towers topped off with spires.

When the original Episcopal Palace was destroyed by a fire in the 19th century, bishop Grau decided to assign the design of the new building to his friend Antoni Gaudí. The two had become friends when Grau was general vicar in the archdiocese of Tarragona and had inaugurated a church for which the architect had designed the high altar.

When Gaudí received the commission, he was still working at the Palau Güell in Barcelona, and thus he could not move to Astorga to study the terrain and the area of the new construction. He therefore asked the bishop to send him photographs to begin the new project. Gaudí sent his design, and it was approved in February 1889. The first stone was placed in June the following year. 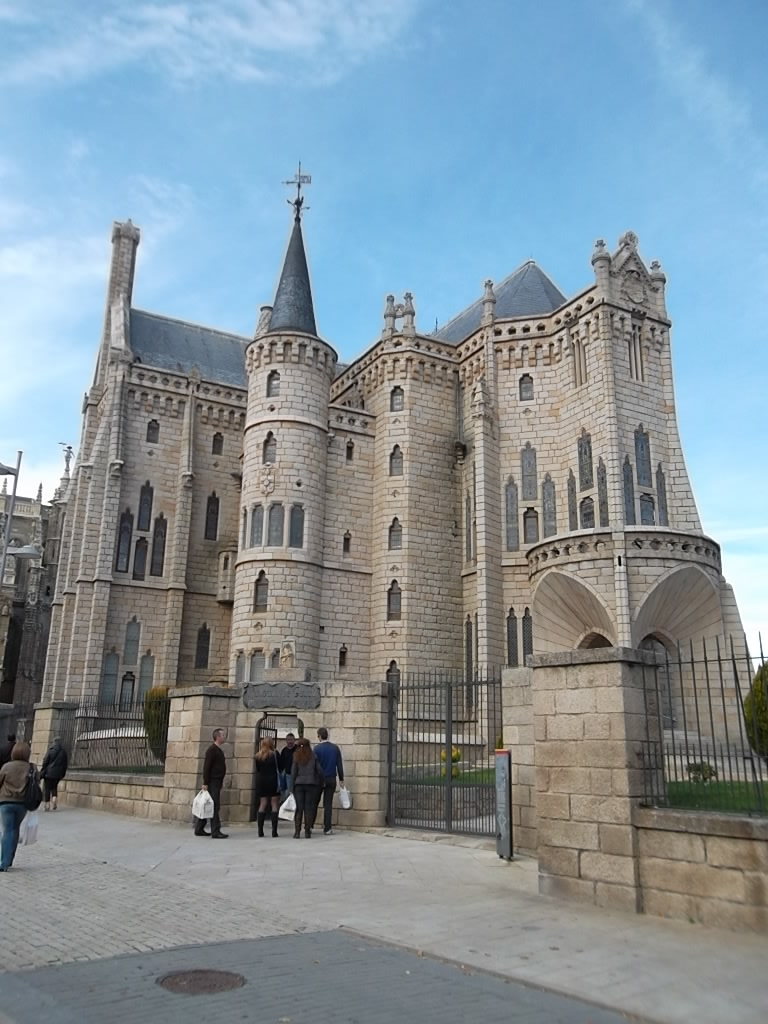 The edifice, built in gray granite from El Bierzo, is in a neo-medieval style harmonizing with its location, including the cathedral in particular. It does, however, also feature some of the elements typical of the later Gaudí, such as the arches of the entrance with buttresses and the chimneys integrated in the side façades. Gaudí had devised a five-meter tall angel to crown the façade, but it was never mounted. The façade has four cylindrical towers and is surrounded by a ditch.

In 1893, after the death of Bishop Grau, Gaudí resigned over disagreements with the council, halting the construction for several years. The palace was completed between 1907 and 1915 by Ricardo Garcia Guereta. During the Civil War the building served as the local headquarters of the Falange. In 1956 Julià Castelltort, a Catalan, began restoration works to adapt the building as a bishop's residence. Later bishop Marcelo González Martín promoted the conversion to the current role of the palace, a museum of religious art called Museo de los Caminos, dedicated to the Way of Santiago.