This famous pilgrimage site in north-west Spain became a symbol in the Spanish Christians' struggle against Islam. Destroyed by the Muslims at the end of the 10th century, it was completely rebuilt in the following century. With its Romanesque, Gothic and Baroque buildings, the Old Town of Santiago is one of the world's most beautiful urban areas. The oldest monuments are grouped around the tomb of St James and the cathedral, which contains the remarkable Pórtico de la Gloria. 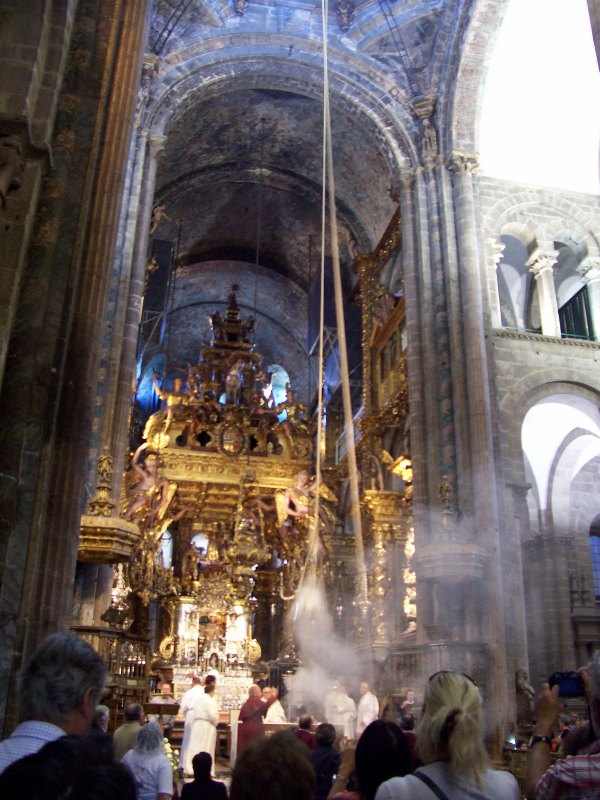 Santiago de Compostela is associated with one of the major themes of medieval history. From the shores of the North Sea and the Baltic Sea thousands of pilgrims carrying the scallop shell and the pilgrim's staff for centuries walked to the Galician sanctuary along the paths of Santiago, veritable roads of faith. Around its cathedral, a masterpiece of Romanesque art, Santiago de Compostela conserves a valuable historic centre worthy of one of Christianity's greatest holy cities. During the Romanesque and Baroque periods the sanctuary of Santiago exerted a decisive influence on the development of architecture and art, not only in Galicia but also in the north of the Iberian peninsula.

On the miraculously discovered spot where the bones of the Apostle had been buried, a basilica was erected in approximately 818 during the reign of Alfonso II, king of Asturias. The Galician tomb thereafter became the symbol of the resistance of Spanish Christians against Islam. At the battle of Clavijo (844) the victory over the forces of Abd ar Rahman II was attributed to Santiago. Taken and laid waste in 997 by Al Mansour, the city was rebuilt during the 11th century around the Apostle's tomb, which had not been violated.

At the Plaza de España, one of the world's most beautiful urban areas, there is an intermingling of the Romanesque and Gothic forms in the Palace of Diego Gelmírez and San Jerónimo, of the Baroque facade of the Hospital Reál with its inset Plateresque portal by Enrique de Egas (1505-11) and the neoclassical theme of the Rajoy Palace.

Elsewhere in ensembles whose composition is less forceful, civil and religious architectural elements from the Middle Ages and the Renaissance are also integrated into a high-quality urban fabric where 17th- and 18th-century themes prevail.

The massive cathedral in the heart of Santiago's old district has become the unofficial symbol of the capital and its two slender towers dominate the cityscape from all directions. The original church that once occupied this spot had small and humble beginnings, but today the giant edifice that is Santiago cathedral attracts visitors and pilgrims from all over the world.

Admission to the cathedral and the passageway that allows you to view the tomb of saint James are free, but there is an additional pass that you can purchase which allows you an "all access" look around the crypt, cloisters and other museum areas. 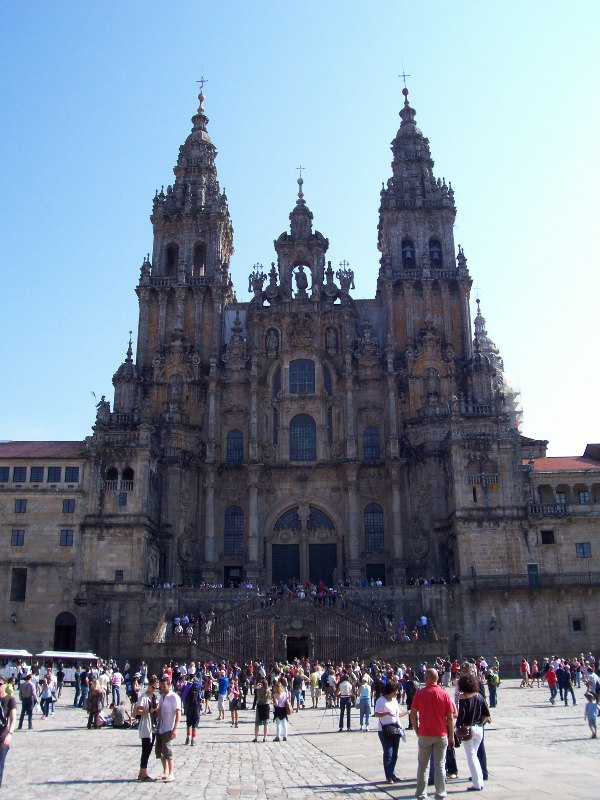 The main facade of Santiago de Compostela’s cathedral faces the Obradoiro square and is in fact named after that plaza, "El Obradoiro". To the majority of sightseers thiselevation is the most splendid and it is also the one that adorns many tour guides, web sites and photographs depicting both cathedral and city. Directly opposite this elevation lies the Rajoy palace, now Galicia’s parliament building.

Standing in front of the "El Obradoiro" facade it is obvious that this fronting has a highly detailed and ornate central section with too considerably less elaborate wings on either side. It is actually only the central section that bears the plaza’s name although this is not the original facade, but an eighteenth century replacement. Left, a close up of the Obradoiro facade with the towers on either side. See the inside of the cathedral.

Most of the "El Obradoiro" was constructed in the first half of the eighteenth century and was designed by architect, Fernando de Casas y Nova in the Galician baroque style. Some older sections do however remain and these include the two converging flights of stairs leading to the main entrance. These stairs date back nearly a hundred years earlier to the seventeenth century and connect to the even older twelfth century structure that is referred to as the original or old cathedral. You can see the stairs and entrance in the photo below. 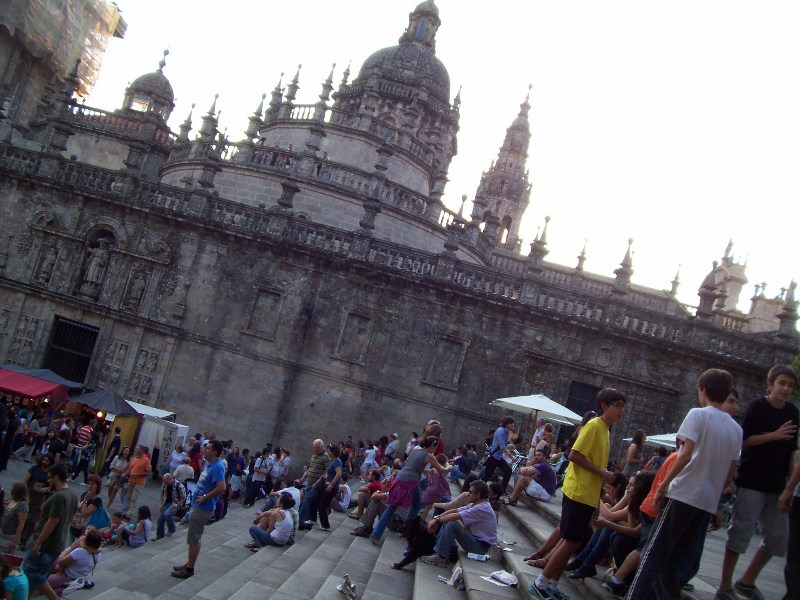 Looking at Santiago cathedral from the square, its most striking feature is the pair of towers called the "Torre de la Carraca" and "Torre de la Campanas". Like many parts of the building these towers claim a heritage from several different eras. The lower and more original levels date back as far as the twelfth century whilst the upper and more recent additions are from the period of the seventeen and eighteen hundreds. These towers, which ascend to seventy metres in height, also combine the baroque and Romanesque styles and demonstrate a level of masonry work unsurpassed in the whole of Spain.

The less visually impressive wings of the cathedral are the cloister to the right and the Archbishop’s palace to the left. Because of their shear size many assume, from a first glance, that these large side structures are completely symetrical, but they are not. Both are quite different in design, from the colonnaded top level of the cloister section to the buttress like projection jutting out from the palace’s wing portion.

Most tourists enter the cathedral from the large Obradoiro square and climb the granite stairs, entering the building through its famous "Portico de la Gloria" archway. Coming into the cathedral through this opening has the decorative altar appearing at the cavernous chamber’s opposite end. There is also an entrance through the northern facade of the cathedral situated in the "Azabacheria" plaza, which brings you into the building from the rear.